In honor of my friend Rich, whom I found on Friendster last week: a Poison cover.

This was recorded during my freshman year at college at one of my dorm’s quarterly “coffeehouse” events. This recording is ten years old! Accompanying me on the guitar is my older brother John. I may have been holding a guitar for show, but I don’t believe I made any kind of noise with it.

Fun things to listen for:

I recently found an old VHS copy of a video my band Happy Panic shot for one of our songs. I believe the intent was that we would enter a Conan O’Brien related college band contest by submitting this video. We did not win. Or if we did, no one in the band told me and I missed the trip to New York. 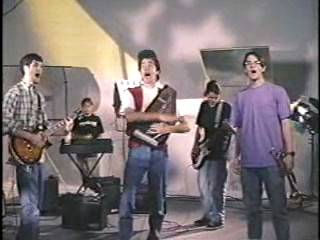 Everybody singing. That’s me on the right. 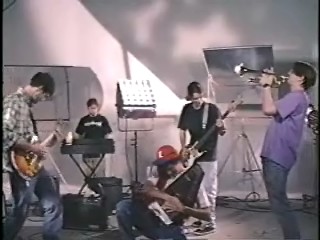 Instrumental break. That is still me on the right. It is really remarkable that I did not get more girls when I was in a rock band with fancy cornet moves like that.

Here’s the video, in its entirety, recorded live without a drummer in one of Northwestern University’s film studios. Watch for Vince to wing a tennis ball at the camera towards the beginning.

This time, a treat: a brand new song. Well, it’s not really brand new. I wrote it in 1998 or 1999 (I never put dates on anything) and have occasionally revised it since. But it is the first time I’ve ever recorded it. I think. This time around you are not hearing Miracle keyboard sounds, but you are hearing MIDI bleeps and bloops that were programmed in with the valuable assistance of the Miracle, as I bought some fancy sequencing software (and, perhaps more importantly, a MIDI to USB cable) and have put it to use.

Vocals were recorded using Belkin’s voice memo attachment for iPod. It’s a roundabout way to record vocals, but it was the only way I could get any volume at all – my laptop’s mic port leaves much to be desired. But as a result the vocal track is at a low resolution and sounds a little like old-timey radio.

This song, like many of the songs I write, could stand to be a little more dynamic, but the lyrics do exactly what I want them to, and if I held off recording songs until I wrote bridges for all of them I would never get anything recorded. (This song originally had a bridge but it was stupid and I got rid of it.)

Here it is, for your listening pleasure:

END_OF_DOCUMENT_TOKEN_TO_BE_REPLACED

So, continuing this week’s tribute to the Miracle keyboard, which I have resumed playing after years away and will continue to do so until I get bored of it, here is another Miracle-enabled song.

And when I say “this week” I really mean “over my next several posts, whenever they are”, in the same way that “The Daily Hey” means “The Whenever I Feel Like It And Probably Not Even Then Hey”.

I wrote and recorded this one on my four-track one night in the dorm during my junior year of college. Check out the drum solo in the middle (also Miracle-enabled).

The title, of course, refers to a famous Carly Simon song. At the time, I don’t think I’d ever heard the song; I just knew of its existence, and I liked the title, and decided to appropriate it. I thought it would be fun to write a song where the narrator keeps getting distracted and interrupting himself.

Lyrics after the jump.

END_OF_DOCUMENT_TOKEN_TO_BE_REPLACED

I am pleased to announce that, after a six-year sabbatical from the music industry, I have resumed playing the keyboard. Not just any keyboard: my old Miracle Piano Teaching System keyboard. After a few days of intensive/obsessive rehearsal, I have managed to relearn almost everything I knew how to play before. Granted, this does not equal a high quantity, nor quality, of material. But it is truly a strong testament to my desire to find creative ways to avoid doing schoolwork.

So now I can finally get around to recording all the songs I’ve written since 1998. And all the songs I wrote before 1998 that I never recorded. First, though, I have to figure out how to record stuff from the keyboard without also recording the sound of my fingers clacking against the keys. I don’t think it’s supposed to do that when you’re using direct input.

Anyway, to celebrate this probable creative reinaissance I am devoting this week to songs I’ve recorded using the Miracle Piano Teaching System keyboard. Keep in mind that many of these were not intended for public consumption, but nevertheless I was proud of them that the time. Nowadays when I listen to them I have to stop my larynx from reflexively trying to fix my pitch.

Anyway, here’s a Miracle keyboard track, one in a series. Fresh from 1996:

END_OF_DOCUMENT_TOKEN_TO_BE_REPLACED

The year 1996 was one of my most prolific, in terms of both songwriting and general creativity. The band I had co-founded the year before would soon add a drummer and move from a sparsely albeit inventively instrumentalized trio into a full-fledged rock ensemble. Desperate to have more songs on which I would sing, and thus not have to play any instruments, I spent the summer of ’96 in a songwriting tizzy.

My general style at the time was to think of a cool title first, and then come up with lyrics and a melody later. The lyrics would usually be strings of non sequiturs linked together only by an imagined relationship to the title of the song. The melody would often come out naturally as I was writing the words down. I was able to write many songs this way. I only had trouble finishing songs when I tried to make them about an actual subject.

(Nowadays when I write songs, which is rare, I usually think of a melody or riff first, then try to write words around it, and then spend a long time thinking about what it should be called. This is probably a more normal method of songwriting.)

I wrote Mr. Claim-the-Credit that summer. I was sitting in my car in the parking lot of WHIO-TV, where I had an internship. I had just returned from my lunch break, but still had some time left, and I didn’t want to go back inside until I absolutely had to. It was that kind of internship. And as I sat there in my turned-off car in the summer heat, the song appeared fully-formed in my head.

Sometime after that, I recorded this demo. My brother Tim is on bass, trumpet, and baritone; Chuck Hague on guitar; Brian McKinney on drums. The arrangement you hear is their collective interpretation of my melody.

Ultimately, my band decided not to add it to our playlist. I seem to remember an outright rejection of any song whose title started with “Mister”. Unwilling to compromise my title (and thus my artistic principles also), I let it go.

END_OF_DOCUMENT_TOKEN_TO_BE_REPLACED

Long before Kelis put out her chant-based shout-out to schoolyard prostitution, my brother Tim and I composed a tune with the same title which is just as chanty and twice as endearing. But only half as much about prostitution. Be sure to listen for Tim’s nosefart solo.

END_OF_DOCUMENT_TOKEN_TO_BE_REPLACED

One day several years ago I was palling around with my pal, the inimitable Charles “Chuck” Hague, and his pal Brian McKinney, just kicking back and recording some of the high quality tracks you’ve come to expect from the Lucas Hackett brand. After we had gotten all of my so-called “songs” taken care of, we sat around in Chuck’s living room, dinking around on small mandolin-like stringed instruments called tamburitzas. We came up with a nice little song, and one of them had the fine idea that such a song should be recorded for posterity. So, in the recording you will hear, the rhythm tamburitza is (well-)played by Chuck, the lead tamburitza is (poorly-)played by me, and the keyboards and surprises are courtesy of Brian.

Here’s a number that I wrote and recorded several years ago with help from my younger brother Tim and mixed very poorly without help from anyone. Words, vocals, and keyboards by me; drums, bass, and backing vocals by Tim. It is a song about the perils of dishonesty.

END_OF_DOCUMENT_TOKEN_TO_BE_REPLACED

Tonight, I saw a minor league baseball game featuring the Dayton Dragons in an exciting match with their conference rivals, the Burlington Coat Factories.

In the spirit of this baseball-related merriment, I present to you a song written and performed by my younger brother Tim, starring A. Bartlett Giamatti, the late baseball commissioner and apparent notorious evil mastermind. I hope I translated the lyrics correctly.

END_OF_DOCUMENT_TOKEN_TO_BE_REPLACED

Here’s a song I wrote a few years ago for a short film my friend Anna was making. The song details the tragic vehicular sexcapades of a young couple. Notably, I managed to record every track on my own, despite not really knowing how to play any instruments.

END_OF_DOCUMENT_TOKEN_TO_BE_REPLACED

Given the escalating tensions in the Middle East, I thought it would be apropos to post a song I wrote a few years back that is very applicable to this situation. Vocals, lyrics, and melody by me; guitar, synth, and arrangement by my brother Tim.