The dog days of summer.

Is this thing still on? 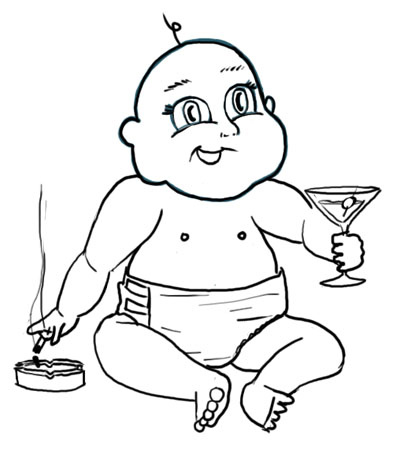 Ahhh… done with the school year. Now to get a jump on that job search. After I chug this here 40. Oh, you sweet delicious malt liquor. Where have you been all my life?

Just ten more days to go. I can make it. I can do this. I will not spontaneously combust. Or perhaps if I do, it will be for other reasons. If a combustion that is spontaneous can be said to have reasons behind its occurrence.

The Denver blizzard of Aught Three would have been the leading story on the national news had other, less daily-life impacting events not been occurring.

Pepsi Blue
If I could use one word to describe this product, it would be ‘blech’. Tastes like carbonated cough medicine. I’ve had store-brand berry colas with more zest and zeal. Why Pepsi would put its name on a product without the slightest hint of any Pepsi connection is beyond me.

Dr. Pepper Red Fusion
It’s like drinking Dr. Pepper without the Dr. Pepper flavor. Tastes neither terrific nor awful… it’s just sort of there, existing. Like eating a plain cookie without any chocolate chips or oatmeal and raisins.

SoBe Mr. Green
What differentiates this product from Pepsi Blue and Dr. Pepper Red Fusion is that it is, in fact, colored green. Before taking a swig, I was expecting to be overcome with the sensation of ginseng or ginger or ginkoa or some strange Far Eastern mystical additive. Instead, it tasted like a less-sweet Pepsi. I was fine with it; then again, I did have it after downing a few unrelated margaritas earlier.

Mountain Dew Code Red
Smoother and easier on the stomach than Mountain Dew (original). As did most college students who attended a university where the president was also on the PepsiCo board of directors, I depended on Mountain Dew to keep me awake during finals week — and hopefully during the tests, as well. However, in my case, I overdid my portion of the consumption throughout the years, and I am now more or less immune to the caffeine power Mr. Dew has to offer. And since the caffeine no longer has any effect, I have no reason to drink it anymore, since the citrus-y taste is too tart for me. But with the introduction of some kind of cherry flavor in Code Red, the new hybrid product does have more of a sweet taste to it. And best of all: it turns your tongue bright red.

All in all, it’s best not to make a habit out of consuming multi-colored soft drinks. I won’t even bring up the effects it might have on the urinary system.

I have renamed my cat “Similarly Mixed Success”. As that does not fit on the tags that you can buy with the tokens over at the pet smart, I have shortened the name to “Simixuc”, which is, coincidentally, the name of an Aztec god. Really. I swear. I might be wrong, but I sure ain’t lying.

I have renamed my cat “Jellica”. He appears to be responding to it by tearing large chunks of carpet up off the floor. I had renamed him previously (to “Recruit Yaney” during a brief fixation with the FOX television series BOOT CAMP) to similarly mixed success.

A Google search for “Jellica” does seem to indicate that it is an actual name. It appears to be popular in eastern Europe and among cats.

The Lucubus regrets the error.

December 25, is, of course, Christmas. December 26 is the lesser-known holiday known as Boxing Day. But did you know that December 27 is also a holiday? That’s right. It’s Obvious Day. On Obvious Day, people are obliged to point out obvious things and reveal obvious information. It is also customary to point out to others that things they just said were completely obvious.

You will know you have celebrated the day correctly when it is painful to say “obvious” over and over. The repetition of the bv sound will cause capillaries in your lips and chin to burst, resulting in a large brown bruise beneath your bottom lip, right where your soul patch would be, if you had a soul patch. You should grow one. I think it would make you look cool.

At this moment I am enjoying a cold bottle of IBC Black Cherry Soda. It is an excellent beverage, and I recommend it to all consumers. Support your local Independent Breweries Company! Although a quick Google search informs me that it is a subsidiary of Dr. Pepper/Seven-Up. Hmm.

Actually, it seems very complicated. The Independent Breweries Company manufactured non-alcholic beverages during Prohibition, it seems, but it closed soon after. The license to sell IBC brand beverages was bought by one company, whole sold it to another, who sold it to another, and so on, and so on, and so on, until 1980 the company that owned it was acquired by Seven-Up, Inc and it enjoyed a wider distribution. Dr. Pepper purchased Seven-Up in the mid-eighties and became, apparently, the Dr. Pepper/Seven-Up Company, which was purchased by Cadbury Schweppes in 1995.

Apparently it’s not just our media corporations that are merging together. Presumably one day Coca-Cola will own all of these. Do I care? No.

Not as long as IBC’s delicious Black Cherry Soda remains on the market.

The day was like any other December day in Ohio — drab, dreary, and dreadful. Yet, what began in the morning hours and continued throughout the rest of the afternoon and on into the black night was a feat unsurpassed in its glory and splendor. It was like shaking hands with God, after which He reaches down, gently tugs on your testicles, and says “How’s yer father?” It was a bright ray of May sunshine on all of the unopened flowers of romance, still waiting, sleeping, in their dormancy. Birds began to sing; wild animals gave birth; we played basketball in the driveway — it was as if time had leapfrogged four months and summer vacation was in sight. It was the day my brother beat Mike Tyson.

It was ten, maybe fifteen years ago. My brother Leon couldn’t have been more than seven or eight at the time. Up until this point, he had showed no competency in any endeavor at all, save for memorizing the uniform numbers of the players on local basketball teams. But this day. When he put himself to bed at the end of this day, he was weary and spent, for he had bested the unbestable. He had conquered, from start to finish, with no codes or pussy-ass shit, one of the most difficult, challenging, blister/tendonitis/eyestrain-inducing games ever to be inserted, removed and blown into, and reinserted in an original Nintendo home entertainment unit. That’s right y’all — I’m talking about Mike Tyson’s Punch Out!

On this night, on the eve of the yearly anniversary of his birth, I toast him. Leon, few people ever have their moment in the sun. At seven or eight years of age, you had yours. You WERE the sun, and the moon, and the stars. A flame never burned so brightly.

I could have beaten that video game. I could have but I didn’t. Why? Too much work, man. Once you get to Tyson, Punch Out! is a really hard game, at least if you don’t use the cheat codes. Nothing is as intimidating to a ten year old video game nut than those big, lightning quick badasses the game throws at you in the final stages. Soda Popinski, The Sandman, Super Macho Man. And of course the King of the Ring himself.

Even making it to the final match was a huge deal. Before anyone had done it, Tyson was a myth, a holy grail. No one could even get to him, no one ever had, not even the game’s designers. Then one night, my friend’s brother “got to Tyson”, and my friend called to say “Guess what? My big brother got to Tyson! Wanna come over?” And I said no. Maybe that’s why I never bothered to beat the game: my false pride displayed at that moment kept reasserting itself – I was above Tyson. Plus, it had already been done, you know, that particular mountain had been ascended. There were other, newer, cooler new games to beat.

But probably it was mostly that I was scared to death of Tyson. That fucker was so fast!

I tried playing Mike Tyson’s Punch Out! again a few years ago, and I was terrible. I couldn’t remember any of the opponents’ patterns, and what I did remember was exactly the opposite of what they actually were. Glass Joe kicked my ass like six times. This was around the time I discovered I had become terrible at all video games, great and small, even (especially) ones at which I had once been indisputably the master. Kid Icarus, Metroid, The Legend of Zelda. When I was 11 I ruled, and now I sucked at them all, and even more at the newer, faster, brighter, more aggressive games they’re marketing today. Super Mario Kart? Forget it. My female friends kick my ass at that. My reflexes are molasses.

So I’m left here with my $4,000 gigahertz-up-the-ass-mostly-for-game-playing PC, waiting impatiently for the release of SimCity 4 (the time between Punch Out! and SimCity could usefully be called The Rise of the InterCaps in VideoGame Titles), and I’ve become the dorkiest of dorks: the “mature” video game player. What’s next, flight simulators and massive “joysticks”?

God, I want a Playstation 2 for Christmas! I want that youth back! Gimme it back! Just for one day! I swear I can beat them all. I swear it.