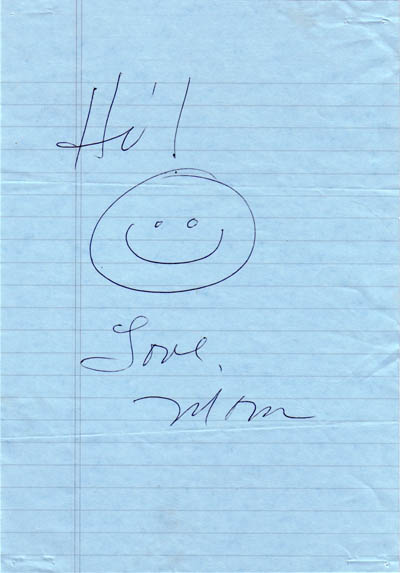 Congratulations to the Lucubus’s very own Vince and his new bride Sara!

Happy Fathers’ Day to my dad:

Today, 3 June 2002, is a very special day. Special indeed, because thirty years ago, my mother and father got married in a grand ceremony with much weeping. Step into the way-back machine with me, why don’t you, and let’s revisit the young couple with a photograph carefully chosen to irritate my mother, should she ever learn how to activate a computer let alone access my web page:

Marilyn “Myrt” Rector and Russell “Rusty” Haynes “Hack” Hackett III lived in the same apartment complex and were introduced by a mutual friend. He was a student in medical school; she was making a humble living doing whatever it was she was doing. Maybe she was a waitress or something. (Little help here? Anybody?) Nevertheless, despite their differences, they soon fell in love.

Neither can remember when the marriage proposal occurred, if in fact it did at all; evidence perhaps of hard partying or (my own pet theory) of an elaborate trick perpetrated by both families in an effort to get their remaining single children married off. Regardless, the marriage occurred thirty years ago today, and soon enough, thirty years ago tomorrow, my older brother John was born. Ha ha! Just kidding! He wasn’t born until at least eight months later. A couple years later, the middle and best child was born, and then some years after that, my younger brother; and we have been a happy, healthy, farting-in-the-kitchen family ever since.

This third day of June is notable for another reason, one which stands in contrast with the long, happy marriage of my parents. Today is the birthday of my ex-wife Darian, with whom I have five small children. At least, they were small last time I saw them, if you drift my gift. By an astounding coincidence, she is also celebrating her thirtieth year, if you consider the beginning of life to be exactly five years before one is born. Darian and the kids now live on the other side of the continent, shacking up in a Seattle trailer park with an industrial musician named Spike, or Brick, or Kip, or one of those other names which contain an i and a k.

We were young and impetuous, but even on the day of our senior prom wedding we were not afraid to goof around:

So, in memory of those good times, happy birthday to you, Darian, and I hope that the kids don’t tax you too much in the coming months. I’m taking good care of the chinchillas, just like I promised I would!

The author would like to point out that portions of the above story are either fictionalized accounts, embellishments for the sake of clarity, and/or bald-faced lies.

As a young stand-up comic, Lucas Hackett was notorious for incorporating audience participation into his act. Here, in a complicated routine on prehistoric man, he demonstrates an ancient birthing position for an unpleasantly surprised Mr. Young Levi Stahl.

Happy Mothers’ Day, Ma! I thought I would embarrass you by publishing this really cool photo taken of (from left to right) you and Aunt Hedy back in the 1950s when y’all were just skinny kids! Before you get upset, let me ask you: I don’t have a funny old picture of Pa to put up on Fathers’ Day. Can you send me that one of him sitting on the toilet with lipstick all over his face? (His teenage years must have taken their toll!)

Congratulations to Jenn and Todd Carney on the birth of baby boy Aidan!

AIDAN TRAVIS CARNEY, your mission, should you choose to accept it, is to be a baby for the next few years, crying and pooping when necessary to accomplish objectives; after these objectives are met, you are to be a young child, and then an older child, and then a teenager ? again, crying and pooping when necessary, but also incorporating field assignments such as going to school, riding a bike, playing baseball, et cetera.

If you accomplish all these goals, then you will grow up to be, perhaps, as great as this man:

At the very least, one day you will get to see this picture.

This message will not self-destruct.

My brother Tim is 24 today, which is about twice as old as he is in this picture. Huzzah!

Earlier today, my friend Sarah wrote in to say:

I’ve never merited a single mention on lucubus, and even your ex-girlfriend’s boyfriend gets play. Hmph.

Be careful what you wish for, Sarah…

Hey, everybody! This is Sarah!

That’s her at last New Year’s, at any rate. Which explains the drink, but not the devious expression. Of course, some things simply can’t be explained.

An introduction is in order.

Those of you who know me well will no doubt recall Darian, my ex of some years back. Nick is Darian’s current boyfriend. When I was in Beavercreek a couple weeks ago I had the opportunity to hang out with them, as they were also in town. And as it turns out, it was not nearly as awkward as it might have been.

This is Nick and Darian. Darian is being a spaz.

Nick sits around in his bedroom and makes electronica on his computer. He’s got a music download page at MP3.com. I have found his music to be very entertaining. I particularly recommend the track “Nick Notis”.

Another notable fact about Nick is that he is like totally super duper tall.

These pictures are of my brothers, John and Tim, and were taken at the Old North Church in Boston one year ago at my cousin’s wedding.

It is my brother Tim’s birthday today. He is 23. Hooray!

This is his web page. Go look at his Hearts scores!