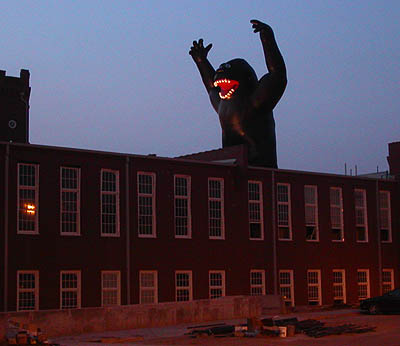 Those of you who know me well will know well that I have longish hippie rockstar hair. In fact, those of you who have never even met me might have noticed I have long hair, based on my webcam archives, assuming a perfect stranger could get interested enough in the past on-camera tomfoolery of another perfect stranger to go digging around for a URL which, while easily navigated to in a very logical fashion, has not exactly been advertised.

So, then, if you’ll indulge me, here’s my webcam archives for your perusal. http://lucub.us/camarchive.html is the URL. The page shows the last twenty pictures I have had as my webcam image, not counting the current image, which is viewable on the main page, to the left of this very column. At this writing the archives go back to about February of this year. I really don’t update the picture very often.

Anyway, if you happen to disbelieve me when I say I am a long-haired hippie rockstar guy, please follow the link above and see yourself proven wrong (assuming you are reading this in fall 2002 or thereabouts rather than some point in the distant future after which all existing pictures in the archives have been squeezed out the bottom).

The point of all this is that I am thinking about cutting my hair. Chop, chop! Goodbye, ponytail! I honestly don’t know if it’s the right thing to do. I’m pretty sure I don’t have the guts, although it is true that I have made some bold hair decisions in the past. Let’s revisit them, shall we?

The chrome-dome look, circa May 2000. The blank slate. The cleansed palate. Also known as “pimple scalp”. I attempted to give myself a haircut and made it all dreadfully uneven, and so I had no choice but to take my trusty Mach 3 razor and take it all off.

Bleached head, March 2000. Ah, the halcyon days of youth. I should note that this was back before a controversial young rapper named Marshall Mathers hit the big time. At least, it was before I’d heard of him. And this was not my first head-bleaching, either. I have bleached my head more than once. You might say I am a chronic head-bleacher.

From the looks of these photos, I haven’t really been too “exp-hair-imental” since the turn of the millenium. My hair attitudes lately have more or less reflected the conservative attitudes of these troubled times. I have opted for the very conservative approach of not getting my hair cut at all – not since this brief flirtation with fashion in December of 2000:

Ever since this fateful haircut, I have not had a haircut at all. I have compensated for the lack of activity in my coiffure by experimenting with a wide variety of facial hair styles, but that’s another column entirely.

So why am I thinking of cutting my hair? There are a number of reasons, not the least of which is that I look ridiculous. Another good one is that blow-drying my hair in the morning takes up a good ten minutes of time that can be better spent doing other things – and unlike other people, whose strength I admire, I am unable to tolerate stepping outside or even putting a shirt on if my hair is still wet. And on top of all this, I suppose I am nostalgic for the days when cat hair was more commonly found amongst the detritus in my apartment than my own.

I do have reasons to keep the hair. It’s a distinguishing feature, something people who don’t know me very well can use as a visual cue to know that they are seeing me and not some other person they don’t know very well. In the shower I’ve made a game out of seeing how many clumps of hair I need to pull out of the drain before my final rinse (my record is something like five. Is that good?). I still dream of rocking out and thrashing about on stage with a guitar, although I suppose that is unlikely to happen as I do not play the guitar and it is lately not in my nature to rock out and thrash about. And I suppose in the event of entering my possible future backup career as a crossdressing burlesque entertainer, it would probably be more to my advantage to wear a wig instead of having the natural long hair.

Still, I see myself in the mirror sometimes, and I let my hair down, and I am nothing but sexy. So I will not cut my hair today, nor tomorrow, nor this week. Odds are, though, I will cut it soon, because being sexy is hard work, and I have enough to do already.

My hair is long and lustrous and bothering me.

Honestly, I don’t know how you girls and hippies and rock stars do it. After it’s long enough to put into a ponytail, sure, it’s no sweat. But my hair is not quite at that length, and as such, is always totally and completely in my face.

I have not cut my hair in about one year. Why not, you ask? Well, I have no good answer. I thought it might be fun to just let my hair grow. And it has been. But it’s been so long that now it’s almost like a crusade. Like, I’ve gone this far, maybe I should refuse to cut my hair until Bush is out of the White House, or until the war on drugs has been ended, or until God once again walks as a man. But dammit, the top of my head is just a big mass of stringy. So look for a haircut in the coming days.

Bush won the presidency tonight, which makes this all the more bittersweet. Pictures now.

The beard is gone. Kaput. It has been donated to the Smithsonian. Also, I cut my hippie hair. Pictures later.